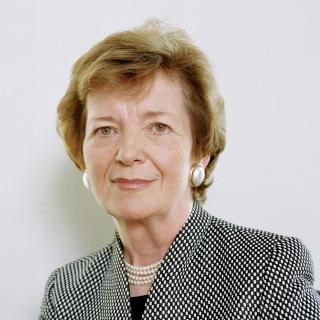 One of the world’s most respected advocates for climate justice and Ireland’s first woman President, Mary Robinson leads the Mary Robinson Foundation—Climate Justice, a center for thought leadership, education and advocacy for the poor and disempowered in the world that are disproportionately threatened by climate change.

A sought-after speaker whose TED Talk received a standing ovation, President Robinson has moved audiences around the world with her passionate and hopeful call for all nations to work together to fight for a sustainable future. Her upcoming book, Climate Justice, has received glowing reviews from former world leaders and the environmental and human rights community.

Barack Obama, awarding Robinson the U.S. Presidential Medal of Freedom, praised her as an “advocate for the forgotten and the ignored”, noting that she has “not only shone a light on human suffering, but illuminated a better future for our world.”

She has taught at Trinity College and Columbia University, served in the Irish Senate for twenty years, and co-founded the Irish Centre for European Law at Trinity College. A graduate of Trinity, King’s Inns Dublin and Harvard Law School, she holds honorary doctorates from more than 40 of the world’s most elite universities and is the recipient of the Indira Gandhi and Sydney Peace Prizes.

Robinson shares remarkable and inspiring examples from her latest book, Climate Justice: Hope, Resilience and the Fight for a Sustainable Future.

She is a founding member of The Elders.